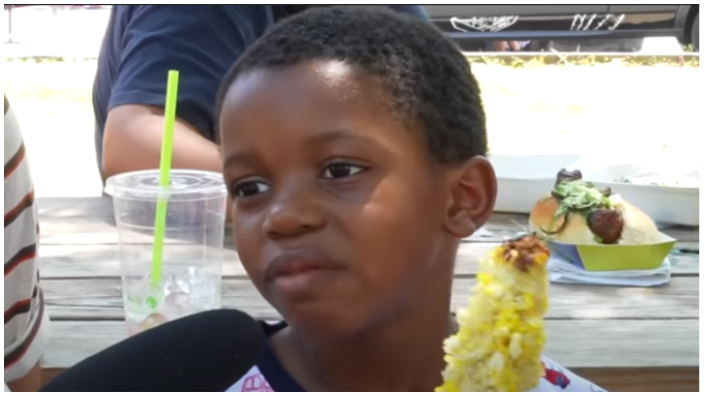 
The internet sensation known as Tariq the “Corn Kid” is partnering with Green Gian to star in a Thanksgiving ad campaign for the brand, according to a news release.

Corn Kid will join Green Giant for a week-long partnership through which he will create corn-filled Green Giant side dishes, donate canned vegetables from the brand to a New York-based food bank and attend the Macy’s Thanksgiving Day Parade in New York City.

The 7-year-old became internet famous in August after his interview with the Instagram series “Recess Therapy” went viral, theGrio previously reported. During the conversation with host Julian Shapiro-Barnum, the adorable, snaggletoothed kid gushed about the wonders of corn.

“What is Thanksgiving without corn?” says Tariq in the news release. “Thanksgiving is practically a holiday about corn. I mean, every day could be a holiday if you get to eat corn at some point — but this is the one day that we get to stay home with family, watch a big parade, and then eat corn. Lots and lots of corn. It’s my favorite day of the year!”

Green Giant also worked with Corn Kid to develop two new corn-infused recipes, the Corniest Mac ‘n’ Cheese and Corn Kid’s Corn Casserole. And he is slated to join the Jolly Green Giant in the youngster’s hometown of Brooklyn, New York, on Monday (Nov. 21) to donate 90,000 cans of Green Giant veggies — including 50,000 cans of corn — to the city’s first and largest food rescue agency, City Harvest.


The partnership culminates at the Macy’s Thanksgiving Day Parade during which Corn Kid will ride the Green Giant Harvest in the Valley float.

“We are very excited to partner with Corn Kid this Thanksgiving as his enthusiasm for corn rivals that of the Green Giant himself,” said Kristen Thompson, Senior Vice President & President, Frozen & Vegetables, B&G Foods. “Corn Kid has a giant heart and we are thrilled to help him share his love of corn with his community this Thanksgiving with an enormous donation of our canned veggies.”

Through the partnership, consumers can enter to win (deadline is Monday, Nov. 21) an exclusive limited-edition Thanksgiving apron that features an audible message from the Corn Kid.